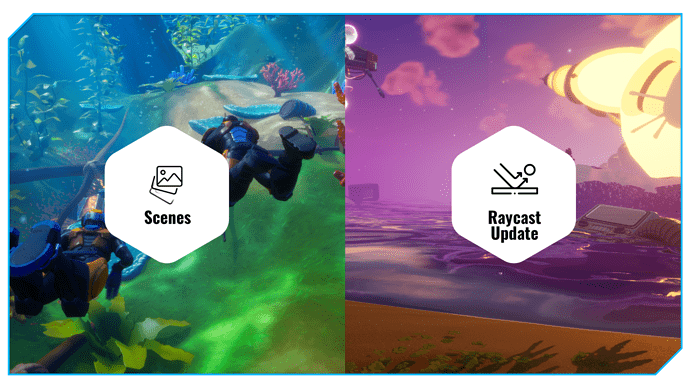 With this patch we are introducing Scenes! Scenes allow creators to easily divide up their games while keeping the same project content accessible across all scenes. A game can be made up of many scenes (e.g. main menu, tutorial, different levels) that display different information, and usually there is some way for a Player to get from one scene to the other. Transferring between scenes as a player is like transferring between games and there will be a loading screen.

All projects come with one scene by default called Main, which will be shown in the Scene drop down in the toolbar as the active scene. Publishing a game will allow you to select which scenes you want to publish.

See our documentation for more details and check out our forum post on how to migrate from child games to scenes.

Make sure to watch the patch notes live stream hosted by Team META on the Core Live Twitch channel at 9 AM PST.

"All" in these method names indicate that it returns all of the hits along the ray, in contrast with the not-"All" version, which returns the first hit.

Each of these takes a table of optional params:

For Scenes we added several more APIs to the Player and World namespaces:

If I'm reading this correctly, we can create an object for transferring between scenes that can determine the coordinates in which the player is spawned in the new scene?

If you are referring to this line:

yea, use the spawn point object and add matching keys