ADDITIONAL INFO:
Please leave any feedback, future additions, or any bugs/problems you’ve had in the comments below.

This community content was created to provide an easier implementation of background audio to your games.

It’s a drag and drop system, with no need to know any Lua.

However, even though it’s a simple setup there's a lot you can use this for.

Next, click and drag the Example Background/Environment_Audio_Triggers template into your hierarchy.

Note: it should appear at Transform: Position at 0,0,0 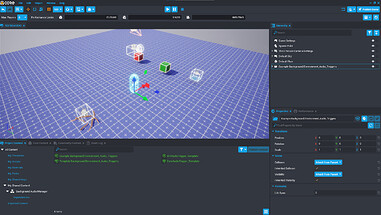 Next, let’s press play at the top of the editor.

Once in preview mode run around the small area, testing out all the different triggers.

That’s the quick setup using the example template, in the next section we’ll look at setting up your own trigger and background audio to work in your own game creations.

TUTORIAL: SETUP YOUR OWN TRIGGER

First let’s go ahead and delete Example Background/Environment_Audio_Triggers from the hierarchy.

Now drag in the Template Background/Environment_Audio_Triggers template into the hierarchy. 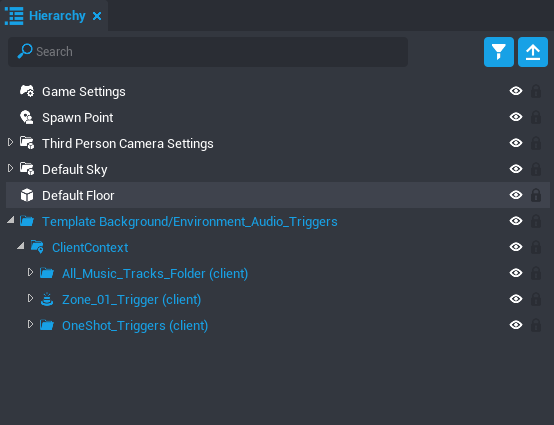 Folder Structure:
Important note:
(The folder structure is very important for the Audio Manager/Triggers to work correctly. If you are choosing to use this CC as your Background Audio Manager ensure this folder structure stays the same, however feel free to change the names of the folders/core objects.)

Great, now that we have created our new template we won’t make changes to the template called Template Background/Evironment_Audio_Triggers

NOTE:
(I recommend looking through each scripts properties. You can hover over the property name for a tooltip of what each property does.)

Now go ahead and delete duplicates of each script, only leaving one script of each.

Note: You may need to select “Deinstance and Delete” if the pop up appears.

The trigger and it’s children should now look like the below image.

Save (ctrl + s) and preview trigger in play mode ( = ), making sure there isn’t any errors.

Open up the folder called All_Music_Tracks_Folder

Then open up the folder called Zone_01_Trigger_AudioTracks

Now go ahead and delete all the audio tracks in this folder. 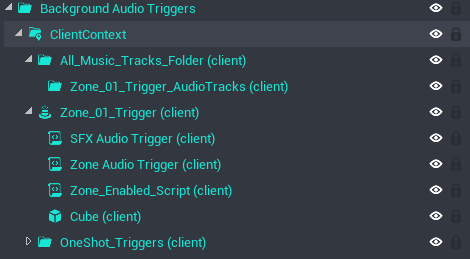 Now that all the audio tracks are deleted let’s add our own!

Click and drag the selected audio track into the folder Zone_01_Trigger_AudioTracks

Once the Audio track is in the folder head down to it’s properties and untick the following bools; “Enable Spatialization”, “Enable Attenuation”, “Enable Occlusion” 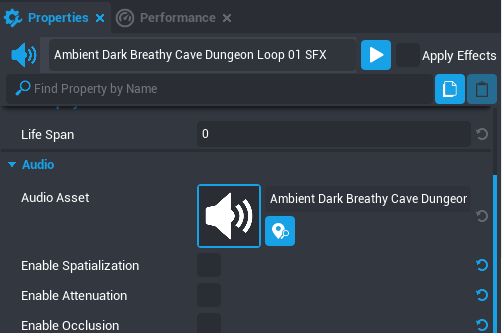 Now that we have an Audio Track in the folder, we can now reference this Audio Track for use in the Zone Audio Trigger script.

Click and Drag the audio track into the property called “Track_To_Play” on the script, and tick the bool “Loop_Track”. 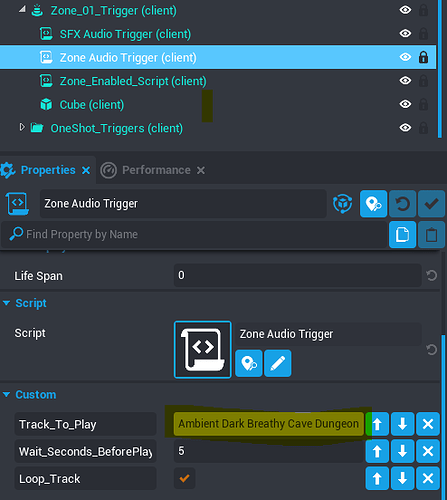 One last thing before we press play and test.

Let’s go ahead and delete the SFX Audio Trigger we won’t need it for now, then press play and test out our trigger.

NOTE: You may notice a delay, if we look at our property “Wait_Seconds_BeforePlay” on the Zone Audio trigger, you’ll notice it’s set at 5. Let’s go ahead and make that 0.

Save and then press Play to test again.

It should now play immediately.

We now have a background ambience sound for our game, but let’s make it a little more interesting.

On entering the trigger let’s play a SFX or stinger.

Add the audio track/SFX of choice to the folder called Zone_01_Trigger_AudioTracks, then edit its properties if needed (I recommend unticking the same bools we did previously)

However we did just delete this, so instead we need to drag the template called SFXAudioTrigger_Template into the Zone_01_Trigger core object.

Once it’s in there you’ll notice its text is red, we want to right click the core object and deinstance.

Then change its name to SFX Audio Trigger.

And finally click and drag the Audio Track/SFX you want it to play into its “OnEnter_SFX” property.

Save, press play and test your audio trigger.

It should now play the audio track/SFX that you placed in the “OnEnter_SFX” when the player enters the trigger.

Congratulations you’ve set up your own Audio Trigger using this Community Content!

From here on I highly recommend checking out the Example Template again to see how I’ve set up some of those Audio Triggers, the Western trigger is most complex while the space station is most basic.

I have also implemented it already in my core game “Lumberjack Valley” which you can check out here:

Overview: One shot triggers are used to play a single SFX/Audio Track, it’s best use is for objects that shouldn’t be heard all the time. For example stepping on branches, in a puddle, a trap, etc…

They’re self contained in one trigger to keep it as simple as possible for use in your games.
Here is the trigger structure/example.

I recommend exploring this trigger to understand how to set it up.

I hope you find this Community content useful in your game creations, also please leave any feedback, bugs or what you’d like to see added to this community content in the comments below.

Quick glance through this thorough description and, "wow". This is what we (I) really needed. Audio tends to be an afterthought for me. mainly because I don't know much about it. Thank you for lowering the barrier to entry. Much appreciated.

I couldn't agree more with the "afterthought" statement, it's something I tend to leave till last (which I need to avoid)

But hopefully with this initial release of this CC I can provide an easier solution for those that want to add background audio/ambience to their games with ease.

Also let me know if you implement it in any of your games, have any problems, questions or want to see something added to it. I'm very open to feedback on this CC

This looks really well thought out and useful!

i have a question

how i stop music when i change zone ?
because when it plays the new sound, it continue to playing the sound of the old zone