and growing Networked objects (pic down) 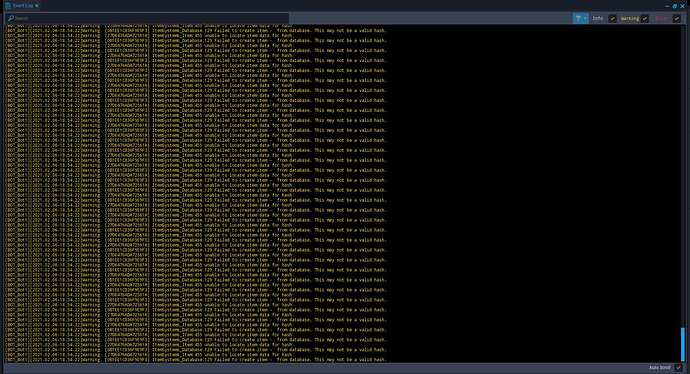 It seems like your Item Database system may have corrupted data within the database. I would suggest clearing the database.

Hi
How make clear database ..... like delete all items and upload again ????

And I have problem with Leaderboard score. Nofuction, noresponse.
(all problem with this game Bohemian Kingdom by codycheck - Core Games)

You can clear a database by wiping a player's data every time they connect.
(The code below would go within the server context, when you are done clearing player's data, remove this script from your project)

It may also be an issue with how you are accessing and storing data. The warning is telling you that an incorrect hash was used to grab/set data in the table. An incorrect hash error is telling you that the index your are trying to grab data from in the Storage Table is invalid. This means that the "player" object you passed into the Storage.GetPlayerData or Storage.SetPlayerData was not a "player" object and was instead something else (for example, a player's identification string).

Would you please the code for the functions containing lines:
129 and 455 of ItemsSystem_Database.lua

If you do not already understand what Hash Tables are and How they work, I would highly suggest researching them so that you can better understand the nature of the warning you are receiving above.
Here is a video about Hash Tables