I have been having some difficulty whenever I was testing my vehicle handling in MP Preview mode. It was a complete disaster. The car was out of control going in random directions, teleporting at weird angles, rubberbanding and all that jazz. This has been an issue in some other games creators have published. Interesting enough, even the racing framework has the same problems in game or in the MP Preview. Speed Jump by Grunlock is a game plagued by this; a car parkour game with a vehicle that can't be handled. He made the game available for download and, in doing so, people get to enjoy the game locally without the lag.

Today I have found something really interesting though. Varglbargl published a game called Downhill Drifter D and mentioned that the game may function differently based on the framerate. I'll be honest, I have a potato PC (retailers are the scalpers in my country), but I can mostly run at high settings and this game was not having it. The car was doing its thing, rubberbanding, randomly bumping into walls, the usual stuff. I lowered the settings to the lowest and the car was fine, almost. It felt a bit weird, wiggly. After this revelation, I went back to my project and lo and behold... Bad graphics = car handles well, but it was still a bit wiggly

I am wondering, is there a fix for this? I am making a map for the Traffic Jam, but I'm afraid players will encounter this problem and it will ruin the experience. Maybe I'll also lose some points because what is a the point of a map if you can't drive through it...

PS: Some creators get a lot of criticism for the vehicle handling even though it's not really their fault. (Kooky Karts by CommanderFoo for instance)

PPS: Sorry for the long post, here's a cartato 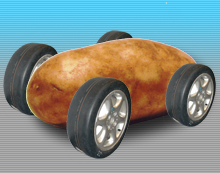 I think car system is having lots of troubles with syncronisation between server and client , thats why , I think , sometimes it feels smooth and sometimes it just go crazy , and those teleporting and car getting crazy its because of this , huge desync that leads to physics failures . In non speed games it does not feel like game breaking but in car games completly break the enjoyness.

I been runing millions tests trying to improve this by tweaking properties but still not runing smooth as It should , even in a flat track with no scenario visuals, just flat track with no materials it still happening when you publish the game.

Hope some update will fix this ^^

Even top games like the derby one still having those glitchy desync at points .And it looks like they did a massive rework of system