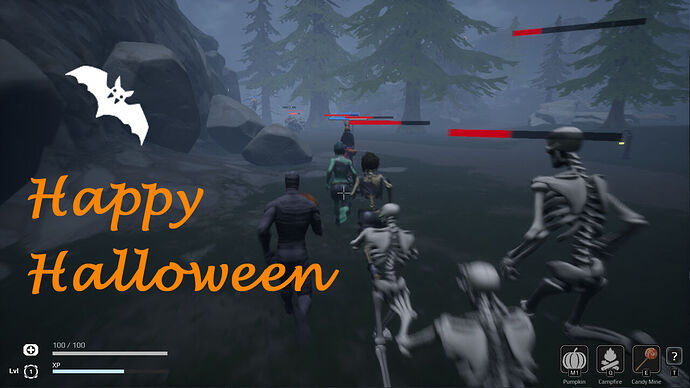 GAME DESCRIPTION:
This map was inspired by Everquest's Nektulos Forest. Although it's quite different and much smaller, there are some familiar features.

A TEST WORLD
It is a world I made for another game I'm working on, but I thought it would be fun to test out with a Halloween themed weapon.

Some mobs will attack on sight and some will only attack when provoked.

Weapons: Throwing Pumpkin & Halloween Candy
Throw a pumpkin at the enemy causing damage in the area of the splat or place Halloween candy on the ground for enemy NPC's. It explodes on contact.

Ability: Place Campfire
Place a campfire on the ground to regenerate nearby players.

The NPC's use the NPC AI Kit by standardcombo.

GAME ROADMAP:
This is just a test world from a map I'm using for another game in development. It's Halloween season, s I figured it would be fun to test out with a Halloween themed weapon and candy treats.