GAME DESCRIPTION:
In this fast-paced FPS, two teams compete for control of Strike Points on a fiercely contested urban battlefield. Storm the rooftops, take down snipers, and fight your way through hails of gunfire and grenades. Earn experience and level up to unlock passive abilities. Use in-game cash rewards to unlock weapon choices. More maps, modes and mayhem coming soon!

Created via the hard work of these Core creators: 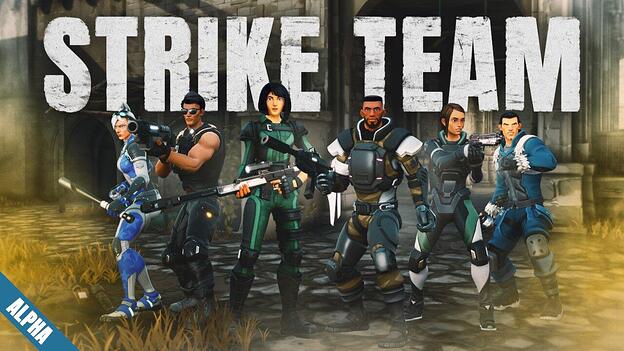 Secondary Weapons
When you run out of ammo on your main gun, but you're still in the middle of a fight, you can switch to this by either hitting '2' or using the mousewheel to swap.

Melee Weapons
Some players love melee weapons. You move faster with a melee weapon (including being able to sprint faster). You never run out of ammo. In close quarters, it’s a great choice.

Equipment
Equipment provides an additional bit of kit you can activate by using the 'E' key. Additional equipment can be unlocked with cash.

Loadouts
These are collections of weapons, equipment and passives.

Maybe you're getting sniped and want to stay for close quarters combat so you take a loadout with a Shotgun, Health Kits, and Health boost. For when you want to be the long range killer, make a loadout with the Sniper Rifle, Fast Hands, and Grenade. Once you're back in the game, you start off with the equipped loadout from the lobby.

When you die, or by hitting the 'L' key, you can choose one of your other loadouts. That loadout will become active the next time you respawn.

Experience
-- is gained from a variety of sources.

As you gain experience your rank will increase. Ranks are displayed in many places throughout the game
Rank 1 to 4

Requisition points are gained by completing games. Gain 1 for defeat or 3 for Victory.

Cash -- This is Game Cash, not a real currency. It can be acquired from the Champion's Crate, and also at the end of a round. The amount you get at the end of a round is influenced by whether you win or lose, and the number of headshots, assists, kills, and objectives that you got.

Strike Coins -- Can be acquired from the Champion's Crate, or from purchasing them with Core Credits.

Movement -- Space to jump, Shift to sprint, C to crouch. Can slide by sprinting and then crouching.

Leaderboards -- They are weekly, so your high score will only be up there for a week at most and then will fall off, so keep coming back!

Sections below to be completed

Strike Team -- In this game mode, the first team to hold 5 Strike Points will win.

Win with or against the following Devs to unlock skins!

Several weapon skins with misaligned scopes have been fixed. Thanks everyone who reported!
Assault Rifle

Big update with many improvements and balance changes.