GAME DESCRIPTION:
MechManical Cove is an exploratory zone without combat that was developed initially as part of the city building competition - hopefully a nice place for any to take some time out.
I hope you enjoy! Fazz.

ROADMAP: (no specific timeline)
I am starting to work on other projects and I will be using the Cove as a hub to these games and others. I plan to continue adding content ongoing. This will include more areas to explore, new npc's, games, tasks and achievements.

Update 5: Personal Droids & Effects!...or Fancy a race? - July 2022
This update is rather large, adding a whole new game and also completing a number of features previously unavailable within the Cove.

OPTIMIZATION:
UPDATE: New joiners will have first login Game visuals optimized to 'Medium' rather than 'All'. Increase or decrease options accordingly. The game will remember your choices and not ask again.
UPDATE: Decriptions for optimzation choices now indicate their likely impact through colour 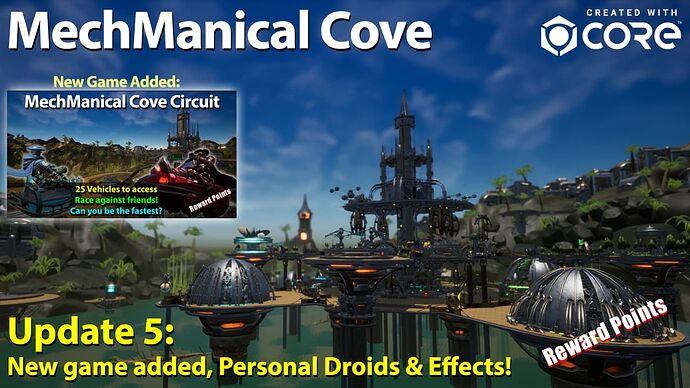