This tutorial was made with the help of the following Community Content:

The first step is to add an ability to kick with the left mouse button.

As of now, the ability is not attached to the player so it can't be used. Equipment allows the player to pick up the ability. From the Core Content window, drag an Equipment object into the Hierarchy. Drag and drop the Ability into the Equipment so it is a child.

The Equipment has a child named BoxTrigger. If the player collides with the trigger then it will pick up the equipment. Preview the project and collide with the equipment trigger. The player should kick when clicking the left mouse button.

Right click the Ability and create a New Script. Rename it KickAbility.

The script is connecting the Cast and Recovery phase of the kick ability to functions OnCast_KickBall and OnRecovery_KickBall respectively. The functions are broadcasting an event. These events will be received in another script to control kicking the ball.

Currently, the player must collide with the equipment trigger to activate the kick ability. Static Player Equipment allows the player to start with equipment already attached.

Preview the project and the player should start off with the kicking ability.

The soccer ball will need physics and collision logic. This makes the Physics Sphere a perfect object for this project.

Enter preview mode and check if the player can dribble with the soccer ball.

To detect if the player kicks the ball, a trigger object will need to be surrounding the ball mesh. 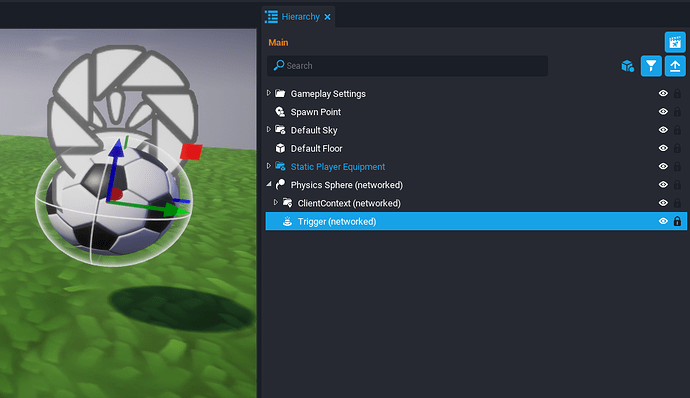 The PlayerKickStart and PlayerKickFinish broadcasted events from the KickAbility script are toggling the kicked boolean variable. If the player overlaps the soccer ball trigger and kicked is true, then the ball's velocity is calculated using the player's forward vector, kickHeight variable, and kickPower variable.

Play the project in Preview Mode. The player should be able to kick the ball much farther than a dribble.

The player should now die when it falls off the Ground Floor.

Spawn Settings will send the player back to a Spawn Point once they die.

The script is waiting for a ResetBall event to be broadcasted. The event calls the Reset function which spawns the ball at the starting position.

The Kill Zone group has a child script named KillZoneServer.

Open the KillZoneServer script and replace the contents with the following code:

The script searches the Hierarchy for an object with the name Physics Sphere and broadcasts the ResetBall event if the object collides with the Kill Zone trigger.

Play the project and see if the player and ball both respawn when they collide with the Kill Zone.

This will be the ending point for this tutorial on making a kick ability and a kickable physics object. It's a starting off point to numerous game ideas involving soccer.