Major thanks to Discord user FleshyOverlord for originally making this. 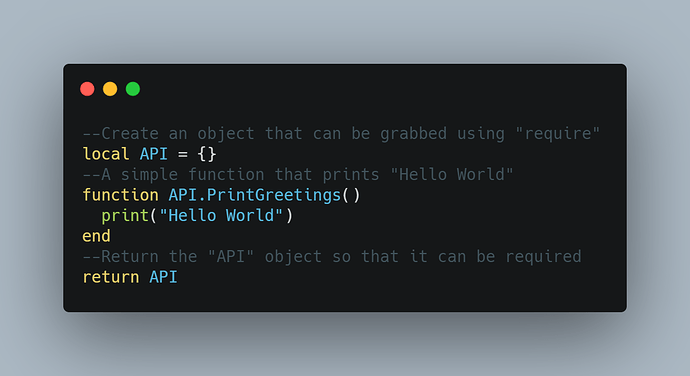 WHAT DOES IT DO?:
Require() essentially lets you embed a script into other scripts. This means you can access the script's functions in either script.

EXAMPLE USE CASES:
This is useful for when you want to have a script that you use in multiple places, but only want to update once when making changes. For instance, you can have a script that generates projectiles based on a bunch of properties, and then drop that script into multiple weapons. Each weapon call call the original script's functions, and you only have to change it once to update them.

I learned about this from the script

the script has a custom propertie of type

that points to the script

and the script itself has this line of code
local ABGS = require(script:GetCustomProperty("API"))

i need to right click my script and choose

Create New Template From This

to turn my script into a template and then i can pass it to a custom property of type Asset Reference.

require() asked to load asset which is not a script

but now i was able to drag and drop the script from the project content tab, could not do that before don't know why.