TEMPLATE DESCRIPTION:
This trading component allows the players of your game to trade player resources between them in an easy and secure way. Drop it in you hierarchy, start solo or multiplayer preview and hit "T" on your keyboard to test it. 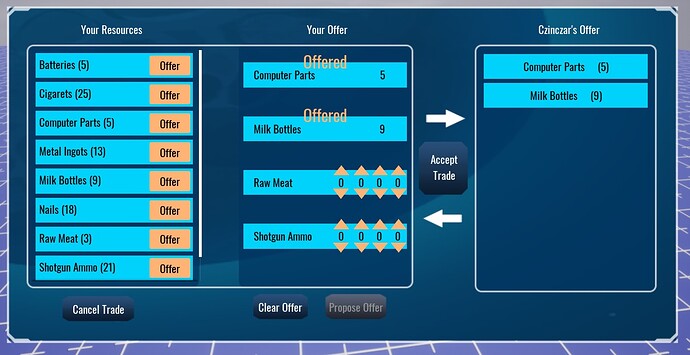 ADDITIONAL INFO:
Don't hesitate to post here if you have comments, suggestions, or if you have found a bug.

Here is a copy of the Read-me file:

This trading component allows the players of your game to trade player resources between them. The typical process is as follows : playerA hits "T" on keyboard to see a list of all players in a 500 units radius. If the players in the list have decided to block all trade requests or if they are already in a trading session, their corresponding button will be disabled. Then playerA clicks on the "Trade" button corresponding to playerB to send a trade request. PlayerB receives a trade request, if he rejects it, then nothing else happens. If he accepts it, then the trade window will appear for both players. During the trading session, both players can't move. Each player chooses the resources that he wants to trade, sets the amount for each resource, then must hit the "Propose Offer" to send their proposal to the other player. In order to make an exchange, both players must at least offer 1 of any resource. Once both players have sent their proposal to the other player, they can click on "Accept Trade" to consent to the deal. At any time before clicking on "Accept Trade", players can cancel their offer by clicking on "Clear Offer" and make a new one, or they can simply end the trading session by clicking on "Cancel Trade" button to close the trading UI.