PRS stands for Player Resources Signals. PRS uses the player resources system built by Manticore to send signals (similar to broadcasting events) from the server to the client(s). The current supported types of data that can be sent are : string, number, player, vector3, coreobject.

Guaranteed Delivery
PRS stands on the shoulders of Manticore as it uses the already existing player resources system and the resourceChangedEvent that comes with it. Thus, every signal sent used PRS is guaranteed to be delivered.

No Duplicate Deliveries
The resourceChangedEvent only fires once, thus assuring that the signal/event is only sent/received once and that there are no duplicates.

Send More Data Per Event
I have tested sending 3k of data to all bots without any issue. I don't know what the real limit is.

Performance
Haven't seen any hit on performance. Performance is directly dependent on the size and type of data that is going to be sent. Server and client both need to make some calculations, and it is a bit heavier client side. PRS needs to be extensively tested in a live server on a real game with other things going on.

New API
API is very easy to use. Once required, users need only to call API.SignalToPlayer() or API.SignalToAllPlayers() . It is very similar to the classic Core events system. 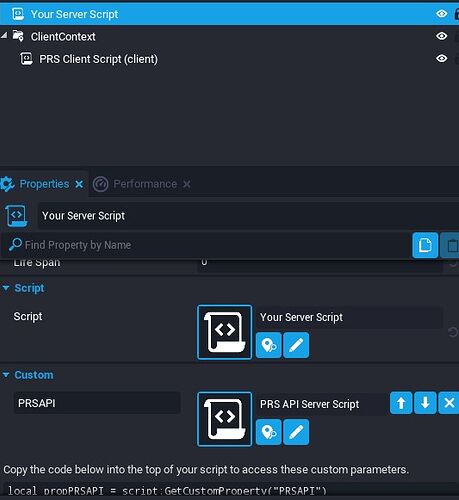 Once this is done, using PRS is easy :

Using resource names is a very clever solution, but I think it suffers from a memory leak. What happens if, after an intense game session of several hours, Player: GetResources () is called?

That's a good remark. I will add this to the "IMPORTANT THINGS TO KNOW". Thanks.

This is a really cleaver approach to the Events limitation. I'll implement it in my upcoming game to broadcast some low-priority events and see how it works. Thanks for sharing!

PD: Not sure if you missed it but there isn't a Bug Tracker link. Do you want any reports here, in the CC comments or do you have a Github project for this?