Creating Costum NPCs with the NPC AI Kit from standartcombo

TUTORIAL SUMMARY:
In this tutorial you will learn how to create a custom NPC with the NPC AI Kit including unique visuals and working animations. Based on your skill level in art designing, you can choose how much effort you put into this! 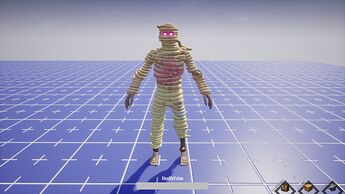 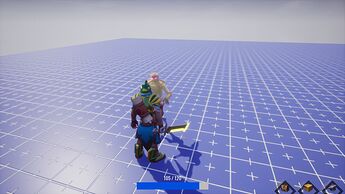 Step 1 - Basics on the Skeleton NPC:
Right before we start we have to decide on a NPC that we want to create. You probably all know the standard NPCs like the Swordsman Skeleton, the Raptor or the Dragons that come with the NPC Kit. (If you don't, just go to Project Content, search for "RPG" and drop the templates into the scene to test them out.) In this tutorial we want to create a Mummy NPC. Take a moment to think of the existing NPC that comes closest to the NPC we want in behavoir and attacking. Choosing a good starting point will minimalise the effort you have to put into creating your custom NPC. The "RPG Skelton - Unarmed" has exactly the same behavior that one would expect from a mummy. So let's have a closer look at the structure of the Unarmed Skeleton. Drag the template into your scene, right-click it and create a new template called "RPG Skeleton - Mummy". For the following, it is important that your skeleton is positioned at x 0, y 0, z 0 and not rotated! 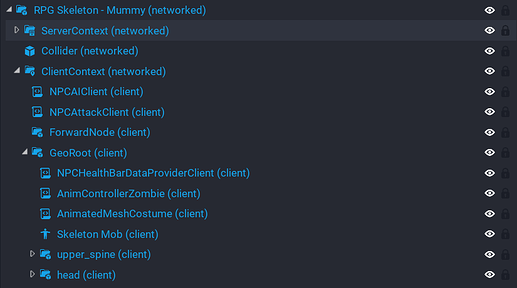 If you look into your hierarchy, you will see that the NPC is split into two main parts, the "Server Context" and the "Client Context". For this tutorial, we can ignore the "Server Context". We don't have to change any attack effects for the mummy. Down at the bottom you can see the "Skelton Mob" and two groups called "upper_spine" and "head". The Skeleton Mob is an animated mesh, which means that it has animation sockets. In the graphic you can see all of the mesh sockets that exist. 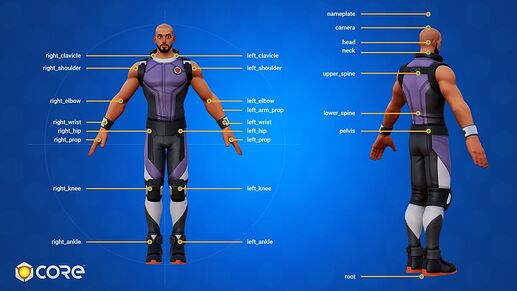 The Skeleton NPC comes with a script that attaches the grouped 3D objects to the group name socket on the skeleton mesh. That means we can create our own objects around the skeleton and then attach them to the right socket so they are moved/animated with the skeleton mesh itself.

Step 2 - Creating your own decoration/costume for the Skeleton:
If you want to create a NPC on your own after this tutorial, make sure you search for a reference image on the internet before you start modelling.
To begin with, delete the "upper_spine" and "head" groups. You have to deinstance the NPC for the next few steps. Now go to Core Content and search for "Ring - Thick". Drag one of them into the hierarchy and scale/move it so it fits around the head of the skeleton, keep your goal in mind, you want it to look like the bandages of the mummy. Choose a material for the ring, I personally prefer "Fabric Burlap Old 01" and "Rope". The fabric material works fine with the "Smart Material" property, the rope material needs some adjustments. Untick the "Smart Material" property and set the U and V tiling to ~ 0,2 .

Create a new group called "head" where the other groups have been before we deleted them and drag the ring into it. Now right-click the "RPG Skeleton - Mummy" and update the template. After that, hit preview and test if the ring is being attached to the skeletons head. 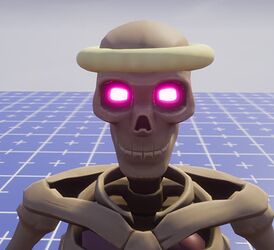 Now copy the ring a few times and place it all over the head, make sure you put in a certain variety of rotation and size. Also try to find other 3D objects that could compose the offstanding bandage-ends. Leave the eyes out as shown in the pictures below. For the artwork it is important to experiment with different 3D objects and materials. 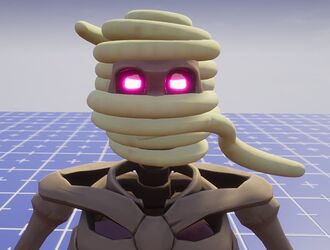 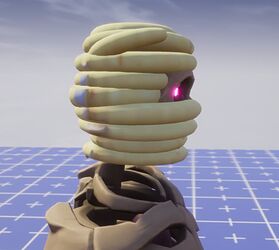 To leave a little work to you (learning by doing), I will only show the socket group, its contents and some usefull tips from now on. Don't worry about the purple eyes - explanation later! Also, if you want to have the same on both sides of the skeleton, feel free to select the objects you want, copy and paste them and then right-click in the scene and "mirror these objects". Don't forget to update the template every now and then to test the animation in preview. Sometimes, objects need a little twist to fit in with the movement/animations of the skeleton!

Step 3 - Complete Head:
-> use the new organic beans for the loose ends 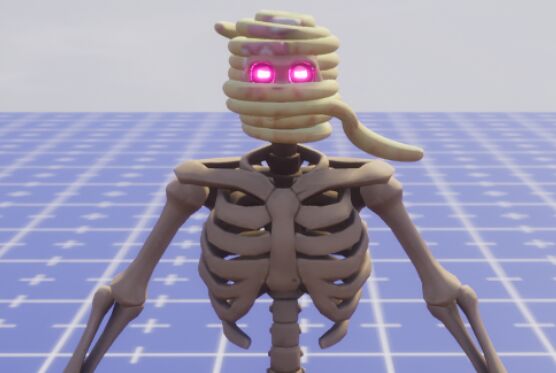 Step 4 - Complete Neck:
-> you have to build the neck a little further down to avoid holes in the costume when the NPC is moving 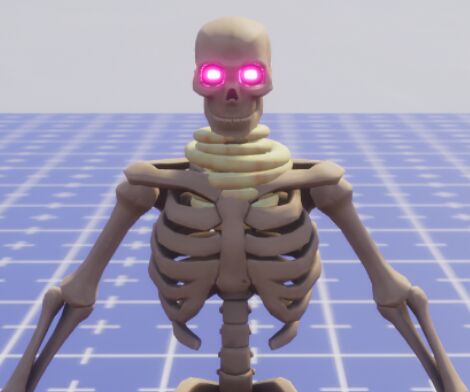 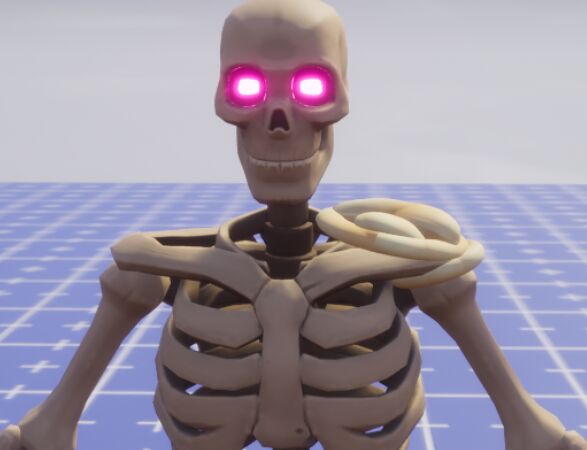 Step 6 - Complete Right Clavicle:
-> this can be mirrored, just try a few mirror options until you get the right position 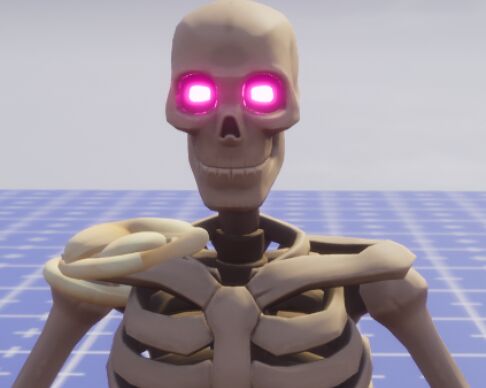 Step 7 - Complete Left Shoulder:
-> add in some details with organic shapes to make it look worn out (hehe) 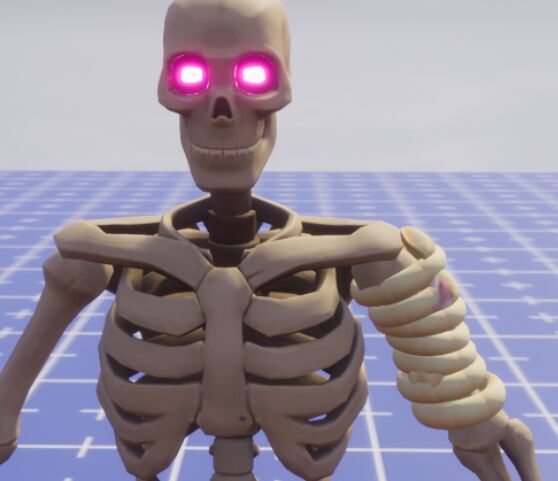 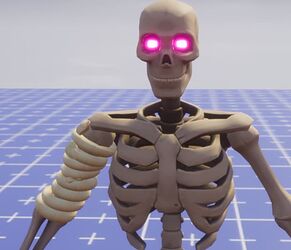 Step 9 - Complete Left Elbow:
-> here you have to rotate the first ring extremely to make it fit while the skeleton is moving 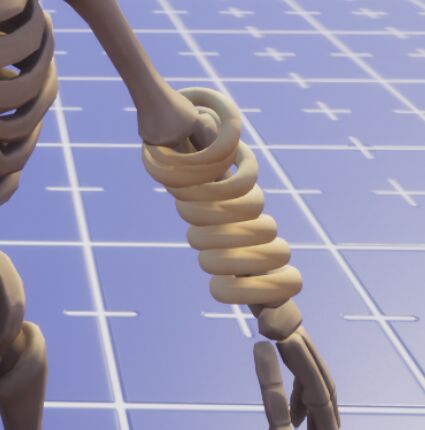 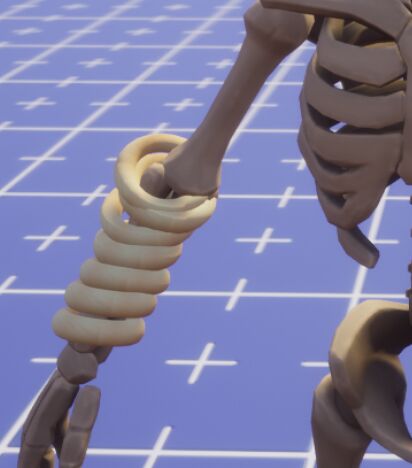 Step 11 - Complete Left Wrist:
-> make sure to end the bandages tight on the wrist 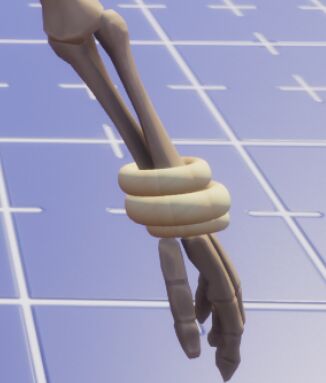 Step 13 - Complete Upper Spine:
-> the shoulder blade has to be covered with multiple rings 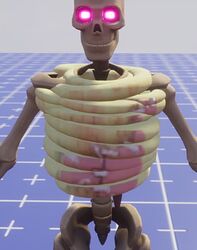 Step 14 - Complete Pelvis:
-> find a solution to cover up underneath the skeleton 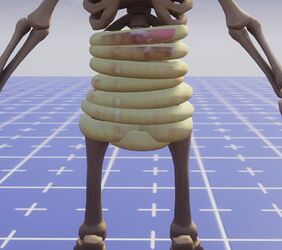 Step 15 - Complete Left Hip:
-> do a transition from the pelvis construct, play with positioning and sizing

Step 17 - Complete Left Knee:
-> take a horn as an ending, but make sure to align it well with the ring 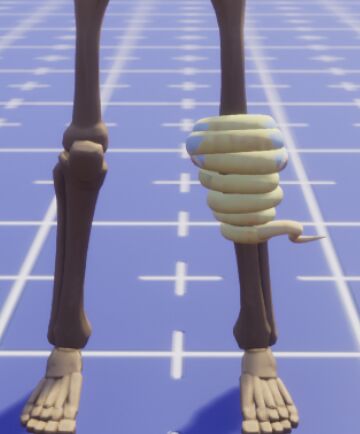 Step 18 - Complete Right Knee:
-> we need bandages further down on this side 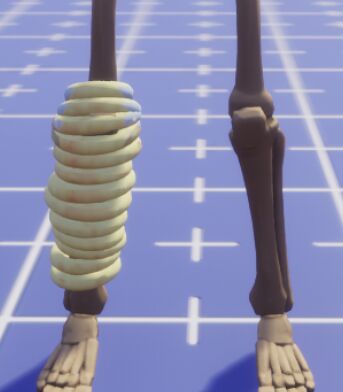 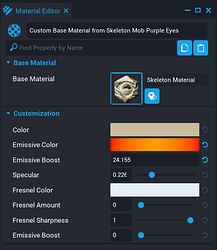 image542×622 41.2 KB
Change the emissive boost color to purple. Then go to the "Skeleton Mob" in your hierachy and select the new material we created in the material slot. The eyes should now glow purple.

Step 21 - Weapons and Animations:
In the case of our Mummy, we don't need to costumize the weapon because there is none. But if you select another NPC as a starting point, you can also costumize the weapon geo, the group with the weapon is called "right_prop" or "left_prop". There you find multiple objects on which you can change the materials. You can also add new 3D objects in this group. To change the projectiles, effects, etc just click through the scripts on the NPC and create new templates with your personal ideas. Also, if you want, you can change the animations the mesh is doing when attacking, go to the "AnimControllerZombie" script do that. See the "Skeleton Mob" animation stance property for possible values. Attention, this is advanced level!

Finished!!!
-> Comment down below if this tutorial was helpful and if there is anything that could be improved!

Resources for working with the NPC AI Kit:

Just wondering, what was the purpose of including the META Inventory system?

Excellent question, I thought since most of the games with NPC enemies are RPG/ DungeonCrawler type of games that is probably a system that is gonna be used anyway. And it is just important that you check if the two versions of the combat system and the inventory system are working together. You don't want to create a custom NPC and then import it to your game and see that something is not working...

Should I do an advanced tutorial with a custom weapon? If so, I'd rather concentrate on the weapon itself and the attack animations, not the rest of the appearance...