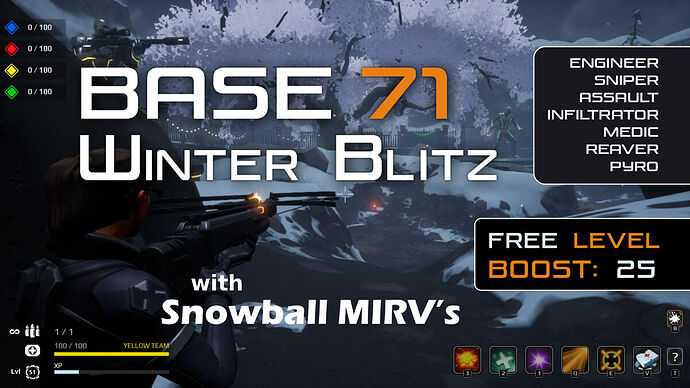 Gameplay:
Score points for your team by killing enemies and controlling the capture point. The first team to get to 100 points wins. The capture point grants access to an ability by accessing the central cube if your team controls it.

Classes:
There are 7 classes, each with their own unique abilities and an additional self-heal.

Sniper (Main Weapon: Sniper Rifle with scope)
High Jump - An extra boost to get into hard to reach areas or use as a quick escape. Works best in combination with a jump.
Mines - Place land mines that explode when the enemy crosses them.

Engineer (Main Weapon: Plasma Rifle with shock grenade launcher)
Healing Dome - Create a healing dome to heal yourself and your teammates.
Shock Grenade - Shoot a shock grenade at the enemy that deals damage over time.

Infiltrator (Main Weapon: Shotgun Pistol with sludge grenade launcher)
Stealth - Sneak up on the enemy to take them by surprise.
Sludge Grenade - Infect the enemy with spreadable noxious sludge (includes a slowing effect).

Combat Medic (Main Weapon: Arc Blades - Melee)
Life Well - Drop a device at your feet that can is activated on contact by the medic or a team member to remove harmful effects and heal teammates in the area.
Portal Blade - Throw a blade at the enemy to teleport to their position.

Reaver (Main Weapon: Ring Blade - A thrown ring-shaped weapon that ricochets)
Force Ring - Throw the force ring to knock back nearby enemies. The effect from this ability will also knock back the Reaver if the impact is close.
Siphon Ring - Throw the siphon ring to steal health from all enemies near the impact.

Visit a weapons terminal to change your class!

Weapons terminals are located in the spawn rooms and on the 4 corners near the outer capture points.