I hereby announce the release of a Lua UnitTest framework for CORE ( hemmerling_luaunit ).

hemmerling_luaunit is a unit-testing framework for the stripped down and modified Lua on the online game development platform "CORE".

The GitHub repository is at

It is fork of https://github.com/bluebird75/luaunit

It is NOT a "game", but a software development tool.

The tool is published "Open for Editing" CORE application, i.e. as CORE community project. So that you can load it as "CORE Project" into your CORE IDE to modify and run it. In the CORE IDE, select "Create / New Project / Community Projects" and search for

. Formally, it is also published at 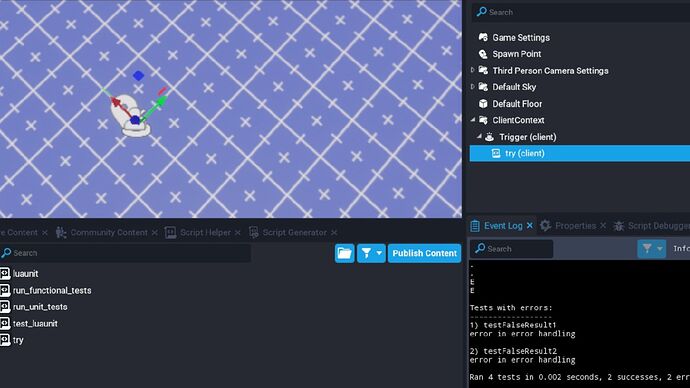 hemmerling_luaunit is a unit-testing framework for the stripped down and modified Lua on the online game development platform "CORE". Follow me on Discord ( http://discord.gg/WfsbJmN5r5 ) ! The GitHub repository is...

, but there is no benefit of running this application, at this moment.
It might be later be published as "CORE Template" too.

In the current state, it is just useful to use it in the internal simulator of the CORE IDE, after loading it as "CORE Community Project".

So I look for voluntary co-developers to make it a really smart widely used and popular tool!

Thank you for this!